Pianist, guitarist and singer-songwriter A.J. Croce pays tribute to his late father, Jim Croce, with a special night of music. Croce Plays Croce features the elder artist’s 1970s hits – including “Operator,” “You Don’t Mess Around with Jim” and “Time in a Bottle” – as well as original music and pop and folk songs that influenced both men.

A.J. Croce’s three-decade career has included 10 studio albums, appearances on The Late Show and The Tonight Show, and tours with such artists as Willie Nelson, Lenny Kravitz and B.B. King. His new album, By Request, is a collection of classic rock and R&B tunes. 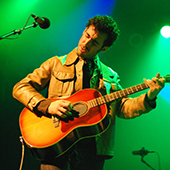