A discussion of the odd road from Gilman Bottom, West Virginia, to hanging out and performing with some of the biggest stars in music. Franklin-based singer-songwriter Frank Dean and his bands have opened shows for more than 60 major recording artists, including Emmylou Harris, Todd Rundgren, Merle Haggard, Marty Stuart and George Jones. Dean will share stories of his colorful life in music, musicians he has met and the music business in general. He also will perform a few songs with help from a friend, Indianapolis musician Jon Martin.

Frank Dean has recorded over a dozen projects either solo or with Blue DeVille, Hillbilly Central, Sindacato, the Snakehandlers and Rural Soul. He has received two “Best Of” Awards from The Indianapolis Star and NUVO for the albums Sindacato and Logan County, plus three “Band of the Year” awards for Sindacato and Hillbilly Central and a “Best Blues Recording” nomination from the International Blues Association for the Snakehandlers’ “Rock plus Roll.” His song “You Walked Tall,” a tribute to Johnny Cash, was recorded at a final tribute by Cash’s band the Tennessee Three. His latest release is Rearview Mirror. 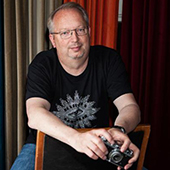