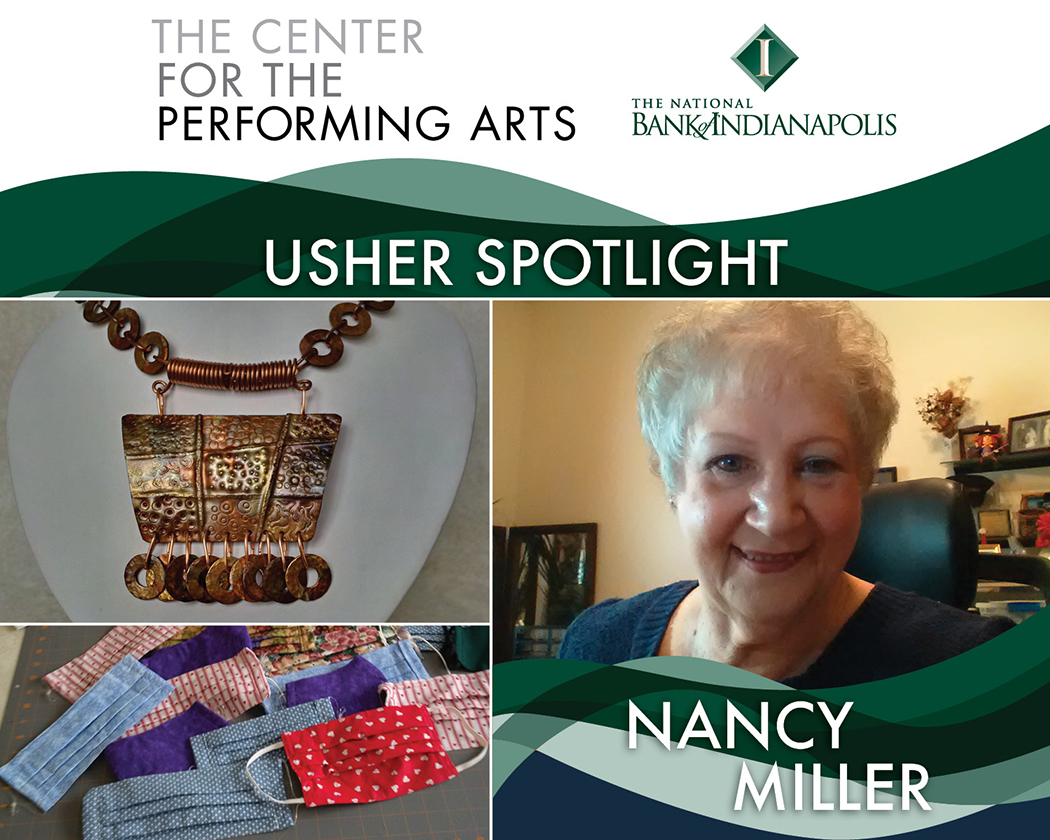 The Center's Usher Corps is sponsored by The National Bank of Indianapolis.

Hi, Nancy! Tell us a bit about you.

I’ve been in the human resources field for 35+ years, working for companies in the publishing, airline, information technology and insurance industries. Before working in HR, I taught elementary school mathematics to third- and fourth-graders. I am originally from Chicago, and for the last nine years I was there, I was a docent at Brookfield Zoo, where I helped visitors interpret the exhibits and learn about animal conservation and taught mini-workshops to Scout troops and elementary students.

I moved to Carmel a little over 22 years ago from the Chicago suburbs, and started as an usher with CPA when the first calls went out for volunteers in Fall 2010 and the Center was still in the “hardhat” stage. Our first concerts were the “tuning concerts,” with some of the local performers such as the Wright Brothers and Carmel Symphony Orchestra. I remember one tuning concert when the conductor stopped the performance midstream and moved some of the musicians to different parts of the stage to try to get a different sound out of the orchestra. At the time, only the Palladium was open and we had fewer concerts.

My babies were all girls, but they each had four legs and a tail. One was a salt-and-pepper Schnoodle named Chelsea, then then there were two blondes, Lucie and Daisie, who were Cocker Spaniels. Like me, Daisie had freckles on her nose. All three are now in doggie heaven.

When I’m not at the Center, in my spare time I like to read, and I’ve always been involved with all sorts of art/craft projects. Most recently, I’ve focused on making rag quilts, silk flower arrangements, and of course, designing and creating beaded and metal jewelry. Though I’ve made jewelry since the early 1990s, I continue to take jewelry making classes to learn new techniques and improve my soldering skills. For some reason, I still haven’t learned how not to burn up jump rings!

When deciding how you wanted to serve the community through volunteerism, what made you choose the Center to dedicate your service?

I watched the progress on the Center’s construction, but hadn’t given much thought to what all it would include. In Fall 2010 I saw a brief article in the newspaper talking about the Center and the upcoming need for volunteers with information about an upcoming informational meeting. After reading the article, I thought it might be fun and something different from the volunteer work I had done with Brookfield Zoo years past, so I went to the meeting. Doug Tatum (now VP of Programming) held the introduction meeting and talked about the Center and some of the things that were planned. I thought “I can do that” and decided at the first meeting to sign up. We had several training meetings at the Monon Center and didn’t get a chance to visit the newly constructed Palladium until late in the year. We finally had a chance to practice our ushering skills during the tuning concerts.

What do you enjoy most about serving as a volunteer at the Center?

There are a number of things that I enjoy. On a personal level, it’s a great opportunity to be exposed to a wide range of performances, on top of being able to select one’s own schedule. On a greater scale, it may sound corny, but it’s a wonderful experience to be a part of an organization that is helping to grow an appreciation for the arts in the community, but especially for children and young adults. It’s amazing when patrons come up to you at the end of a performance and thank you for making the concert possible.

What is your favorite performance that you’ve ever seen at the Center? What made the experience so special?

I have a few favorite performances. The annual Great American Songbook Academy is my overall favorite. Each year I am amazed by the talented high school students who participate in the Academy and go on to performing in the finals at the end of the week. They are all so talented, I don’t know how the judges can just select the top three or four. I also enjoy all of the dance and acrobatic performances. I participated in dance and tumbling programs when I was a kid and have always wished I had continued with it as I got older. Of the concerts we had in the past 10 years, I especially remember Tony Bennett’s first visit to the Palladium, when he asked the sound engineers to turn off all the microphones and sang a cappella from the stage. I was in the back of the auditorium and was blown away by the sound of his voice coming through without amplification.

Can you share an example of a moment when one of your fellow volunteers inspired you with their service to a patron during a performance at the Center?

I remember two special instances with ushers helping out patrons. I don’t recall which ushers were involved, but one situation was when a visually impaired patron got turned around in the Palladium halls and the usher offered their elbow to the guest to escort them to their seat. The second instance was when an elderly patron was separated from their party and the usher guided them to several sections to help them remember where their seat and family were located. These two situations remind me just how important our roles can be and the kind of service we provide.