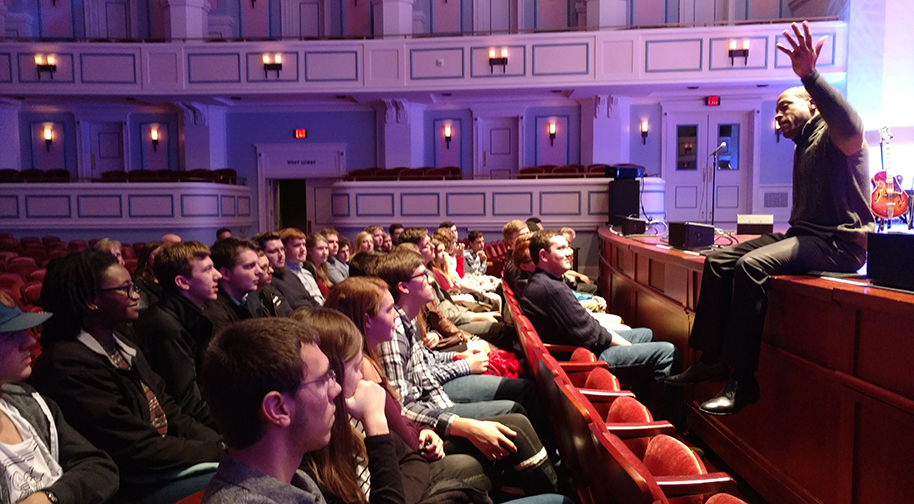 CARMEL, Ind. – Students and other viewers can register now for the new season of the Center for the Performing Arts’ Front Seat series, which invites high school and college students with interests in the performing arts to talk with seasoned performers and production professionals about the influences and experiences that shaped their careers.

Launching Aug. 24, the 2020-2021 season of Front Seat is taking place online through Zoom teleconferencing. A limited number of students can participate in each live discussion, but anyone interested in the performing arts and the entertainment industry can register to watch the conversation and submit questions through the chat function. The program is sponsored by KAR Global, and registration is free.

Los Angeles-based sound designer Cricket Myers has worked with theaters across the country and earned a Tony Award nomination (the first in sound design for a woman) and a Drama Desk Award for Bengal Tiger at the Baghdad Zoo on Broadway. She also has received 23 Ovation Award nominations.

Michael Stiggers Jr. made his Broadway debut in the Tony Award-winning Beautiful: The Carole King Musical and recently has been performing in Disney's The Lion King. He also is a voiceover artist with national campaigns and projects for Adidas, Uber and Nickelodeon Network.

Lizzi Gee was choreographer for A Christmas Carol on Broadway and the 2014 film Pride. She is an Old Vic Theatre Associate Artist whose work spans musicals, plays, operas, film and television, including numerous West End productions and U.K. tours.

A sought-after saxophonist, clarinetist, flautist and clinician, Todd Williams was initially known for his work with the Wynton Marsalis Quintet/Septet and the Jazz at Lincoln Center Orchestra. Currently directing the Jazz Ensemble and Jazz Combo at Indiana Wesleyan University, he also has penned a variety of contemporary gospel choral works.

The mission of the nonprofit Center for the Performing Arts is to engage and inspire the Central Indiana community through enriching arts experiences. The Center presents and hosts hundreds of events each year, including the Center Presents performance series, featuring the best in classical, jazz, pop, rock, country, comedy and other genres. The campus in Carmel, Indiana, includes a 1,600-seat concert hall, the Palladium; a 500-seat proscenium theater, the Tarkington; and the black-box Studio Theater. The Center is home to the affiliated Great American Songbook Foundation and provides space and support services for six resident companies: Actors Theatre of Indiana, Carmel Symphony Orchestra, Central Indiana Dance Ensemble, Civic Theatre, Gregory Hancock Dance Theatre and Indiana Wind Symphony. The Center also provides educational and experiential programming for people of all ages. More information is available at TheCenterPresents.org.