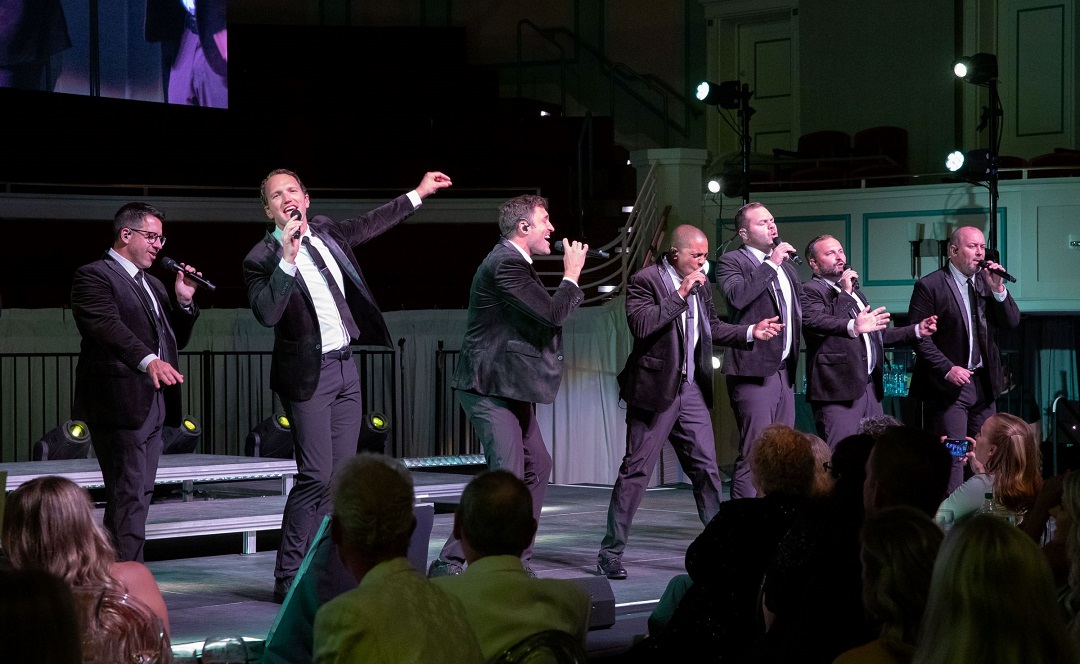 A cappella group Straight No Chaser wows the crowd Friday at the Palladium during Center Celebration 2022. The group also was inducted into the Great American Songbook Hall of Fame during the gala. (photos by Bill and Sara Crawford)

CARMEL, Ind. – Returning to an on-site, in-person format after two seasons away, the Center for the Performing Arts’ annual gala Friday drew a sellout crowd to the Palladium for an elegant dinner, a series of stellar performances and an unprecedented outpouring of generosity from the community.

Through table reservations, auction sales, partnerships and donations, Center Celebration 2022 presented by Krieg DeVault generated more than $689,000 in support of the Center’s arts and educational programming.

“Friday’s event was our opportunity to thank the people and organizations who have helped to sustain the Center’s mission during these challenging past few years,” Center President/CEO Jeffrey C. McDermott said. “True to form, they stepped up again and took their support to new heights.”

Acclaimed a cappella group Straight No Chaser, celebrating the 25th anniversary of its founding at Indiana University, earned multiple ovations with its headline performance. Earlier, all nine members took the stage for the group’s induction into the Great American Songbook Hall of Fame.

The evening included a special announcement: With a lead gift from local developer and Center board member Justin Moffett and his wife, Jennifer, the Center has launched a Transportation Grant Fund to help school groups cover the cost of bringing students to the Center for arts and education events, with a goal of eliminating this key barrier to participation.

Center Celebration 2023 is set for Saturday, Sept. 23, 2023, at the Palladium. The headliner will be singer-songwriter Amy Grant, winner of six Grammy Awards, 22 Gospel Music Association Dove Awards and a Kennedy Center Honor. Information and table reservations are available now at TheCenterPresents.org/Gala.