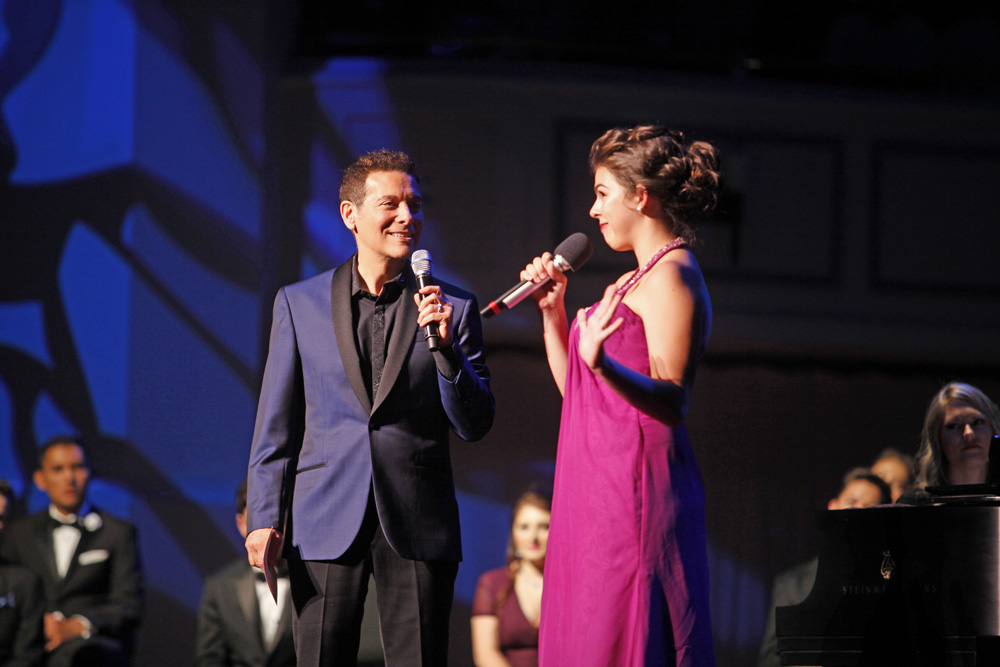 Host Michael Feinstein introduces finalist Emily Estep of Fresno, CA, at the 2017 Songbook Academy®,
the only national intensive for high school students that focuses on the Great American Songbook.

Now celebrating its 10th year, the Songbook Academy® is the nation’s only music intensive for high school students that is focused on the Great American Songbook, timeless standards from the worlds of pop, jazz, Broadway and Hollywood.

Each year, hundreds of talented teen vocalists from across the country apply for just 40 openings at the weeklong academy, a life-changing opportunity to learn and perform under the guidance of Broadway performers, entertainment industry professionals and educators from top college arts programs. The week culminates in a final concert in which top participants earn, among other honors, opportunities to perform in the nation’s most prestigious venues with the Songbook Foundation’s founder, five-time Grammy Award nominee Michael Feinstein.

“Working with these rising talents and seeing the Songbook Academy grow into a truly national program over the past decade has been one of the most rewarding developments of my career,” said Feinstein, who leads the team of professional mentors each year. “We have impacted the lives of so many wonderful young people, and only with the support of the Efroymson Family Fund – now in its fourth year – could we have reached this important milestone with such strong momentum to keep moving forward.”

The 2019 Songbook Academy is scheduled for July 13-20 at the Songbook Foundation’s headquarters, the Center for the Performing Arts in Carmel. Events open to the public include the July 17 Public Masterclass, the July 18 Songbook Showcase and the July 20 Songbook Academy Finals. Tickets for the finals concert will go on sale June 7 at TheCenterPresents.org.

About the Great American Songbook Foundation
The mission of the Great American Songbook Foundation, founded in 2007 by five-time Grammy® Award nominee Michael Feinstein, is to inspire and educate by celebrating the Great American Songbook – the timeless standards of pop, jazz, Broadway and Hollywood. Headquartered at the Center for the Performing Arts in Carmel, Indiana, the Foundation advances this rich legacy by curating physical artifacts of its creators, performers and publishers; operating a multimedia exhibit gallery; overseeing the Songbook Hall of Fame; offering programs for the public and research opportunities for scholars and artists; and providing educational opportunities for student musicians, including the annual Songbook Academy® summer intensive. The Foundation is a Cultural Affiliate of the Los Angeles-based Grammy Museum®. More information is available at www.TheSongbook.org.