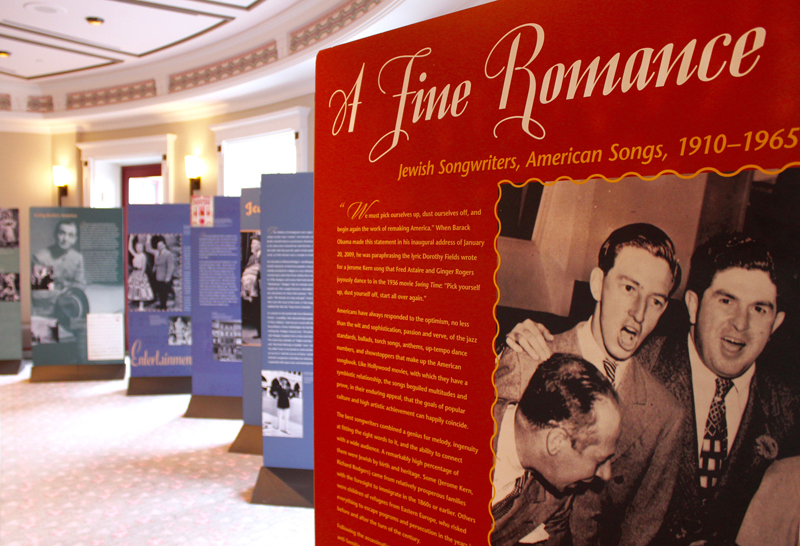 Installation to be displayed at five Central Indiana locations

The Great American Songbook Foundation is teaming up with Central Indiana community organizations this winter to highlight the cultural contributions of songwriters from Jewish immigrant backgrounds.

All came from families that immigrated to America in the 1800s or fled persecution in Europe at the turn of the 20th century. Their popularity was fueled by the advent of the radio receiver, the broadcasting microphone, the talking movie, the long-playing record and other inventions that brought music to mass audiences.

“It is truly remarkable how many of the timeless standards of American popular music came from artists of Jewish heritage – even the Christmas songs,” said Chris Lewis, Executive Director of the Great American Songbook Foundation. “In light of the holiday season, and some of the disturbing incidents of bigotry and anti-Semitism we have seen locally and across the country in recent years, we thought this was an important time to celebrate not only the contributions of these immigrant writers but also the shared human values reflected in their work.”

The exhibit, maintained in the Foundation’s Songbook Archives & Library, will be available for viewing free of charge at the following Indianapolis-area partnership sites:

The project includes a social media component. Visit the Great American Songbook Foundation on Facebook (www.facebook.com/SongbookFoundation) for additional information on the songwriters and updates on the exhibit’s journey around Marion and Hamilton counties.

The exhibit initially was curated by writer David Lehman, based on his award-winning 2009 book A Fine Romance: Jewish Songwriters, American Songs. The American Library Association and nonprofit publisher Nextbook Inc. sponsored its development.

For more information on the exhibit and the Songbook Foundation, contact Executive Director Chris Lewis at (317) 844-9446 or visit TheSongbook.org.

About the Great American Songbook Foundation
The mission of the Great American Songbook Foundation, founded in 2007 by five-time Grammy® Award nominee Michael Feinstein, is to inspire and educate by celebrating the Great American Songbook – the timeless songs of pop, jazz, Broadway and Hollywood. A Cultural Affiliate of the Los Angeles-based Grammy Museum®, the Songbook Foundation is committed to preserving and elevating this rich legacy by curating physical artifacts of the Songbook’s creators, performers and publishers; operating a multimedia exhibit gallery; overseeing the Songbook Hall of Fame; offering programs for the public and research opportunities for scholars and artists; and providing educational opportunities for student musicians, including the annual Songbook Academy® summer intensive. More information is available at www.TheSongbook.org.