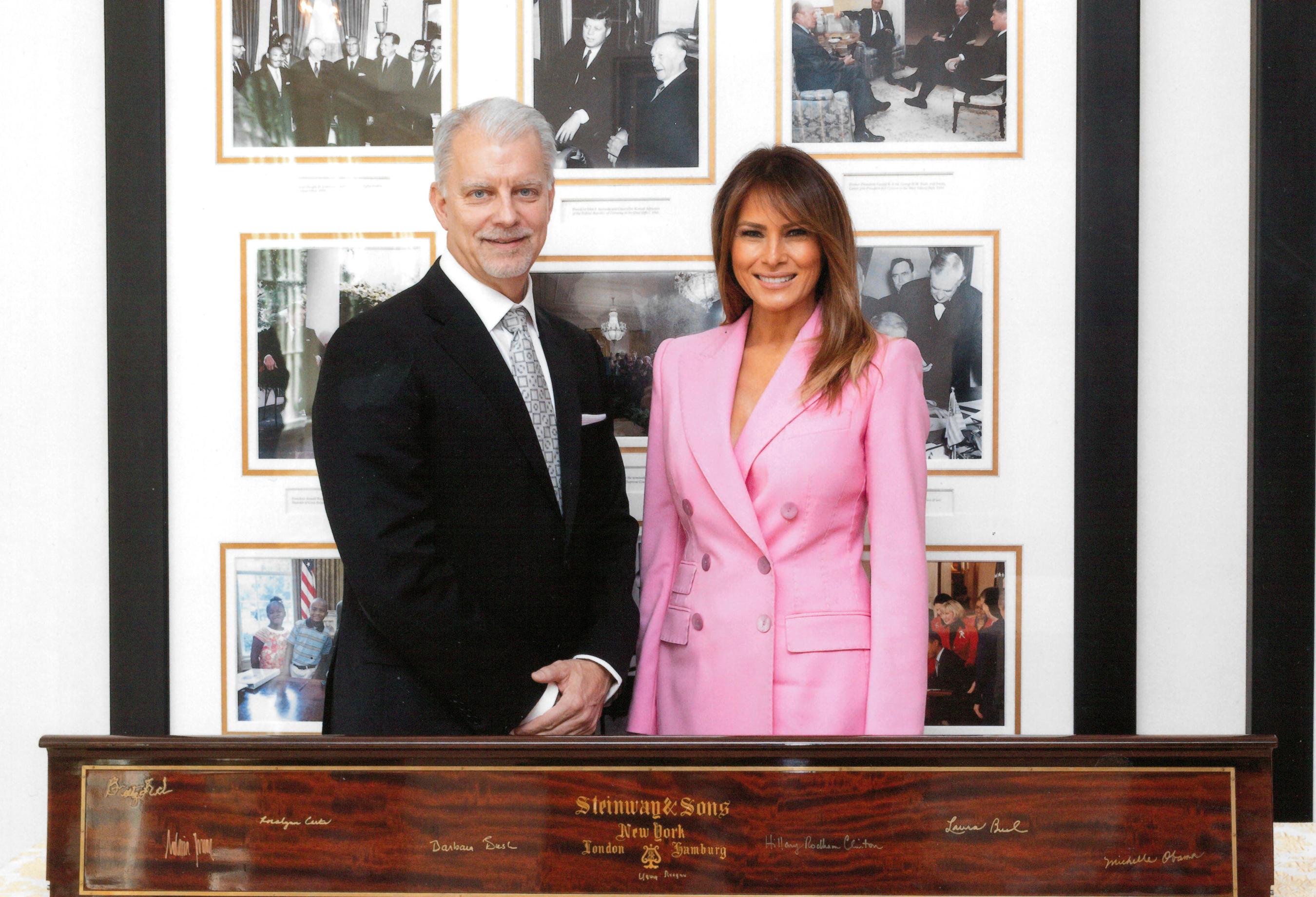 With the stroke of a pen, First Lady Melania Trump continued a little-known presidential tradition that is kept alive by the Great American Songbook Foundation.

The piano, a 1911 Steinway & Sons Model O “small grand,” was restored through a partnership between the Steinway company and musician-preservationist Michael Feinstein, founder of the Songbook Foundation. It was updated for functionality and restyled to reflect the French Empire décor of the Blue Room, an elegant reception parlor at the White House. The piano made its national debut when Nancy Reagan invited Feinstein to perform at the Ronald Reagan Presidential Library’s February 2011 centennial celebration for the former president.

The signatures are made in gold marker on the piano’s fallboard, or keylid, visible above the keys. Nancy Reagan was the first to sign it, and other First Ladies have added their names as opportunities arose. In this case, Jeffrey C. McDermott, President/CEO of the Songbook Foundation and the affiliated Center for the Performing Arts, arranged a brief meeting with Mrs. Trump on May 8 and personally took the fallboard to the White House for her signature.

“The First Lady was very gracious and generous with her time,” McDermott said. “We’re grateful that she appreciates the spirit of the project.”

The America’s First Ladies piano has been displayed previously in the Songbook Foundation’s Exhibit Gallery at the Palladium concert hall in Carmel. It is expected to be a centerpiece attraction when the Foundation completes its plan to establish a freestanding Great American Songbook Hall of Fame Museum.

About the Great American Songbook Foundation.
The mission of the Great American Songbook Foundation, founded in 2007 by five-time Grammy® Award nominee Michael Feinstein, is to inspire and educate by celebrating the Great American Songbook – the timeless standards of pop, jazz, Broadway and Hollywood. Headquartered at the Center for the Performing Arts in Carmel, Indiana, the Foundation advances this rich legacy by curating physical artifacts of its creators, performers and publishers; operating a multimedia exhibit gallery; overseeing the Songbook Hall of Fame; offering programs for the public and research opportunities for scholars and artists; and providing educational opportunities for student musicians, including the annual Songbook Academy® summer intensive. The Foundation is a Cultural Affiliate of the Los Angeles-based Grammy Museum®. More information is available at www.TheSongbook.org.