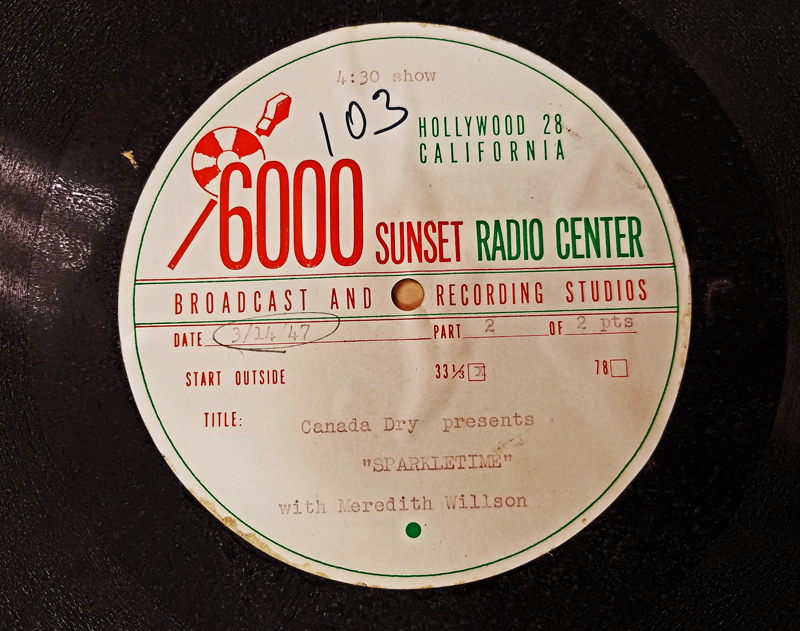 This “electrical transcription disc” from the Songbook Archives contains a 1947 episode of Sparkle Time,
a radio variety show sponsored by Canada Dry and hosted by Meredith Willson and his orchestra.

CARMEL, Ind. – A grant from the National Endowment for the Arts will enable the Great American Songbook Foundation to digitize historic radio recordings featuring The Music Man creator Meredith Willson and make them available online for scholars worldwide.

The recordings document Willson’s early career in the 1940s and ’50s, when he was a host and music director for several national radio shows, conducting ensembles like the San Francisco Symphony and talking with Hollywood and Broadway stars including Walter Pidgeon, Lucille Ball, Desi Arnaz, Frank Loesser and Dick Powell.

“This is a wonderful collection of recordings from the early days of radio, and it showcases Willson’s successful career in broadcasting prior to writing The Music Man,” said Lisa Lobdell, archivist for the Great American Songbook Foundation. “This project will have great value for researchers interested in the history of radio and post-World War II American culture in general.”

Currently, the recordings exist only on fragile 16-inch lacquer discs, once a common format for documenting radio broadcasts. Known as “electrical transcription discs,” they are part of a larger Meredith Willson Collection entrusted to the Songbook Foundation in 2012 by the late Willson’s Music Man Foundation. Other items from the trove – including scripts, scores, photos and correspondence from his long and varied career – already are available online as the Songbook Foundation’s Meredith Willson Digital Collection.

The $10,000 grant from the NEA’s Art Works program will fund the process of making digital copies to preserve the irreplaceable content of the deteriorating lacquer recordings. The digital files will be housed on Indiana University’s Media Collections Online streaming platform and available by request through the Songbook Foundation.

“These awards, reaching every corner of the United States, are a testament to the artistic richness and diversity in our country,” said Mary Anne Carter, acting chair of the National Endowment for the Arts. “Organizations such as the Great American Songbook Foundation are giving people in their community the opportunity to learn, create and be inspired.”

About the Great American Songbook Foundation
The mission of the Great American Songbook Foundation, founded in 2007 by five-time Grammy® Award nominee Michael Feinstein, is to inspire and educate by celebrating the timeless standards of pop, jazz, Broadway and Hollywood. Headquartered at the Center for the Performing Arts in Carmel, Indiana, the Foundation advances this rich legacy by curating physical artifacts of its creators, performers and publishers; operating a multimedia exhibit gallery; overseeing the Songbook Hall of Fame; offering programs for the public and research opportunities for scholars and artists; and providing educational opportunities for student musicians, including the annual Songbook Academy® summer intensive. The Foundation is a Cultural Affiliate of the Los Angeles-based Grammy Museum®. More information is available at TheSongbook.org. 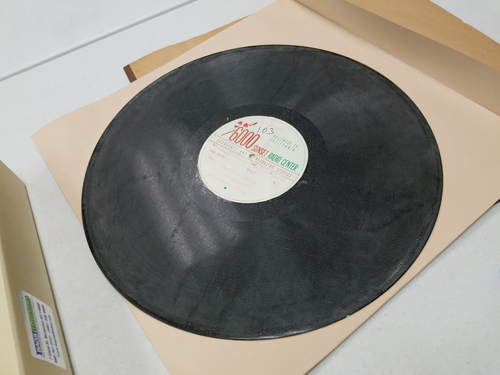