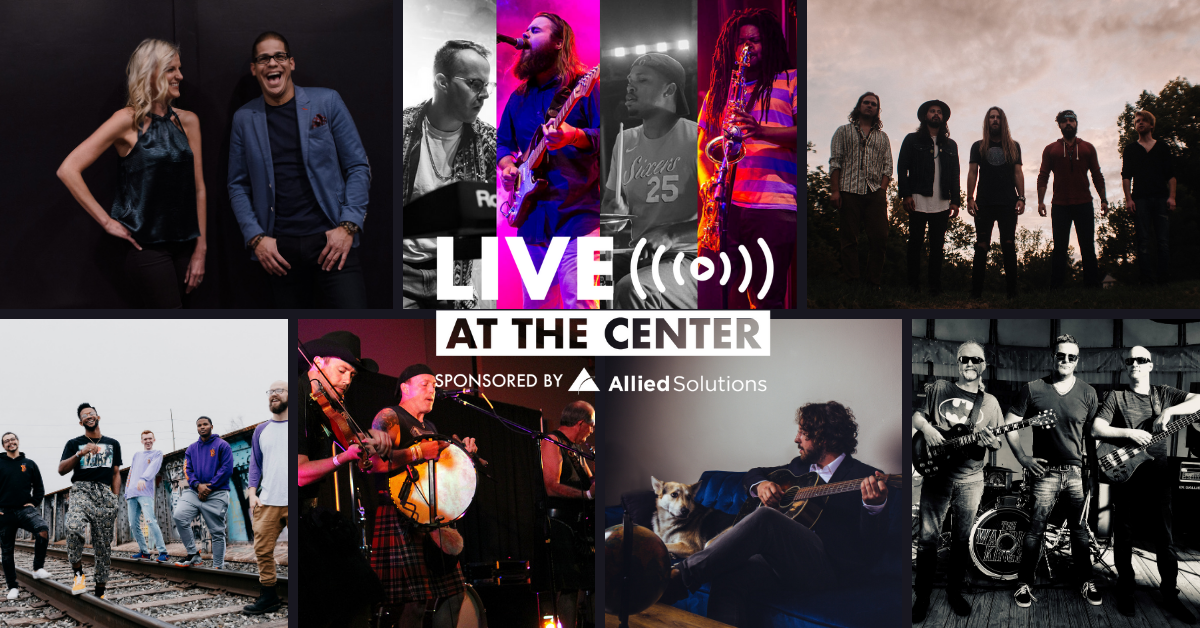 Artists in the second round of "Live at the Center" include (clockwise from upper left) Pavel & Direct Contact, 800 lb. Gorilla, Joshua Powell and Great Train Robbery, the Warrior Kings, Jeff Kelly and the Graveyard Shift, Highland Reign and Huckleberry Funk.

Free to view on YouTube, Facebook and the Center’s website, Live at the Center sponsored by Allied Solutions delivers a front-row perspective on the best in local original music, with multi-camera HD video and rich stereo sound. More information on registration and viewing options is available at TheCenterPresents.org/LATC.

The newly announced shows from January through March include sets from Jeff Kelly and the Graveyard Shift, 800 lb. Gorilla, Pavel & Direct Contact, Joshua Powell and the Great Train Robbery, Highland Reign, Huckleberry Funk, and the Warrior Kings, all performing live at the Center’s three venues.

“The response to Live at the Center this fall has been tremendous, both from viewers and the local music community,” said Jeffrey C. McDermott, President and CEO of the Center for the Performing Arts and the affiliated Great American Songbook Foundation. “The audience seems to build with each show, and we’re reaching thousands of new people throughout and even beyond Central Indiana.”

With even more shows planned later in the spring, the initial 2021 dates include:

Livestreamed from the Studio Theater

Livestreamed from the Studio Theater

Livestreamed from the Tarkington

Updates on Center activities and online arts and entertainment opportunities are available through the weekly Interlude e-newsletter. Anyone can join the Center’s eClub mailing list by visiting TheCenterPresents.org and clicking the “SIGN UP” button.

The mission of the nonprofit Center for the Performing Arts is to engage and inspire the Central Indiana community through enriching arts experiences. The Center presents and hosts hundreds of events each year, including the Center Presents performance series, featuring the best in classical, jazz, pop, rock, country, comedy and other genres. The campus in Carmel, Indiana, includes a 1,600-seat concert hall, the Palladium; a 500-seat proscenium theater, the Tarkington; and the black-box Studio Theater. The Center is home to the affiliated Great American Songbook Foundation and provides space and support services for six resident companies: Actors Theatre of Indiana, Carmel Symphony Orchestra, Central Indiana Dance Ensemble, Civic Theatre, Gregory Hancock Dance Theatre and Indiana Wind Symphony. The Center also provides educational and experiential programming for people of all ages. More information is available at TheCenterPresents.org.