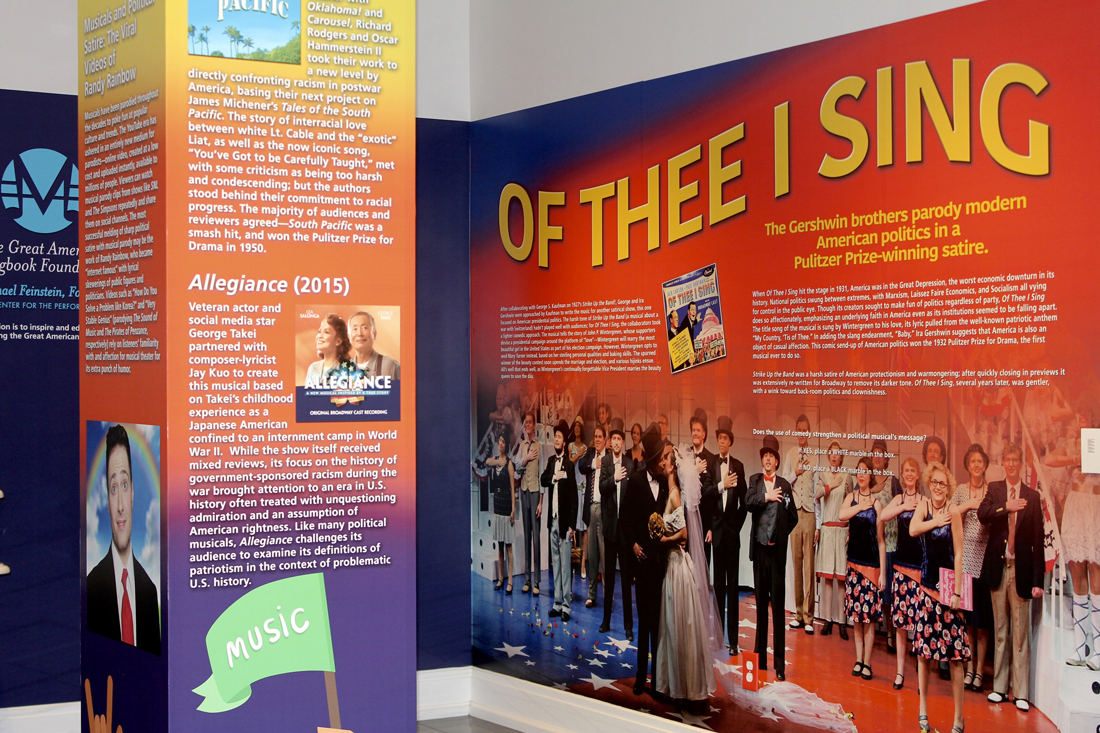 Interactive installation, Of Thee I Sing, will run through 2020 election

CARMEL, Ind. – With a momentous national election just a year away, the Great American Songbook Foundation has assembled an interactive historical exhibit exploring the intersection of politics, patriotism and entertainment in the world of musical theater – and it didn’t start with Hamilton.

Of Thee I Sing: Politics on Stage is on display through November 2020 in the Foundation’s Songbook Exhibit Gallery, housed at the Palladium concert hall at the Center for the Performing Arts. Admission is free to the gallery, which is open weekdays, select Saturdays and prior to select performances at the Palladium.

Broadway shows highlighted in the exhibit include:

The exhibit also examines the treatment of war, race, women’s rights and other issues in musicals such as Hair, South Pacific and Cabaret; the work of musical satirists like YouTube star Randy Rainbow; and the well-known Broadway and Tin Pan Alley composers who wrote campaign jingles and patriotic songs over the years. For example, in a project presaging the civic-minded Schoolhouse Rock animations of the 1970s, lyricist Hy Zaret (“Unchained Melody”) authored a political songbook for kids in the 1950s titled Little Songs for Busy Voters.

In addition to images and artifacts from the Songbook Foundation’s vast archives and other sources, the exhibit includes various interactive elements. A large touchscreen allows visitors to browse through related songs and images from the featured musicals. At several points, the exhibit invites viewers to ponder thought-provoking questions and respond “yes” or “no” by dropping a white or black marble into a clear container. The voting will be tracked throughout the year on the Foundation’s social media accounts.

“With all the partisanship in the news these days, we wanted to create an environment where visitors of all ages could consider politics from a fresh angle and enjoy some constructive conversation about these important social issues and how they are portrayed in our popular culture,” said professional exhibit developer Cathy Hamaker, one of several experts who assisted Songbook Foundation Archivist Lisa Lobdell in designing Of Thee I Sing.

A traveling version of the exhibit is available free of charge for display by schools, libraries and other community organizations.

Of Thee I Sing: Politics on Stage

On display through November 2020

The Palladium at the Center for the Performing Arts, 1 Center Green, Carmel IN 46032

Hours: 10 a.m. to 4 p.m. Mondays, Thursdays and Fridays; 10 a.m. to 2 p.m. Tuesdays and Wednesdays; noon to 4 p.m. the second Saturday of each month (starting in January); and one hour prior to select Palladium performances

The mission of the Great American Songbook Foundation, founded in 2007 by five-time Grammy®

Award nominee Michael Feinstein, is to inspire and educate by celebrating the timeless standards of pop, jazz, Broadway and Hollywood. Headquartered at the Center for the Performing Arts in Carmel, Indiana, the Foundation advances this rich musical legacy by curating a vast archive of items representing its creators, performers and publishers; operating a multimedia exhibit gallery; overseeing the Songbook Hall of Fame; offering programs for the public and research opportunities for scholars and artists; and providing educational opportunities for student musicians, including the annual Songbook Academy® summer intensive. The Foundation is a Cultural Affiliate of the Los Angeles-based Grammy Museum®. More information is available at TheSongbook.org.