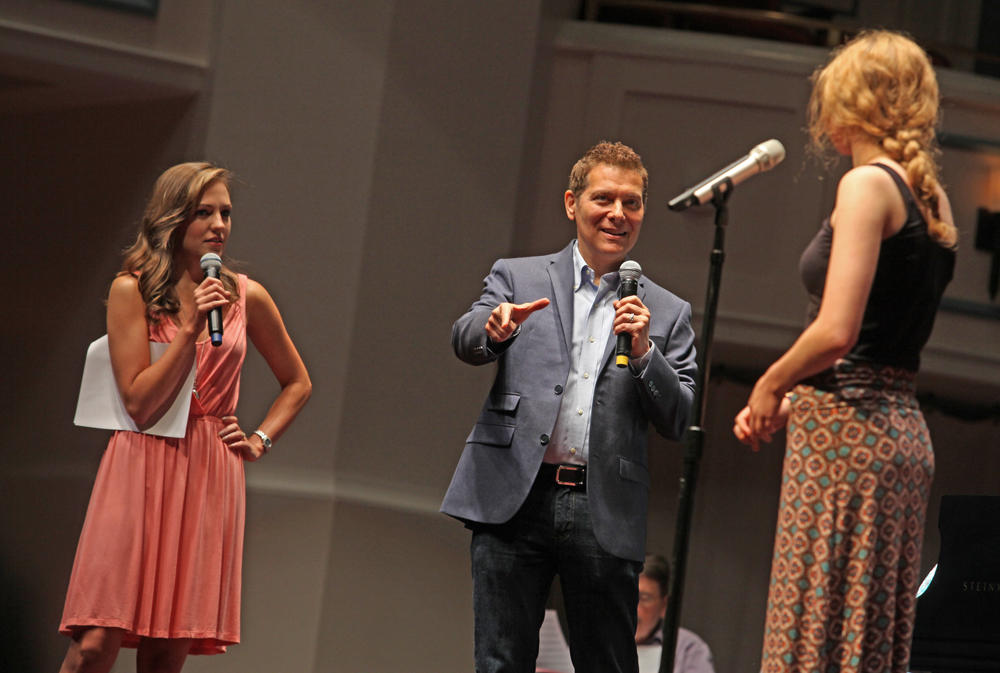 Broadway star Laura Osnes will be among the professional mentors at this year’s Songbook Academy,
reprising her 2015 role coaching finalists with Michael Feinstein at the Public Masterclass.

In the 10th year of the Great American Songbook Foundation’s flagship education program, 40 top high school vocalists from 16 states coast to coast will spend the week of July 13-20 at the Foundation’s home, the campus of the Center for the Performing Arts. In classes, workshops and rehearsals led by professional mentors, music directors and vocal coaches, they will learn music history as well as performance technique and song selection and interpretation, all in preparation for the Songbook Academy Finals concert, where they will compete for titles and opportunities to perform at prestigious venues across the nation.

This year’s mentors are:

See below for additional information on the mentors.

Tickets are now available for all of this year’s public performances:

The Songbook Academy is sponsored nationally by the Efroymson Family Fund, a fund of the Central Indiana Community Foundation, with additional support from the City of Carmel. The Public Masterclass and Songbook Showcases are sponsored by Ruth’s Chris Steak House. The Finals concert is presented by the Center for the Performing Arts and sponsored by Salon 01 and Current Publishing LLC.

About the Great American Songbook Foundation
The mission of the Great American Songbook Foundation, founded in 2007 by five-time Grammy® Award nominee Michael Feinstein, is to inspire and educate by celebrating the Great American Songbook – the timeless standards of pop, jazz, Broadway and Hollywood. Headquartered at the Center for the Performing Arts in Carmel, Indiana, the Foundation advances this rich legacy by curating physical artifacts of its creators, performers and publishers; operating a multimedia exhibit gallery; overseeing the Songbook Hall of Fame; offering programs for the public and research opportunities for scholars and artists; and providing educational opportunities for student musicians, including the annual Songbook Academy® summer intensive. The Foundation is a Cultural Affiliate of the Los Angeles-based Grammy Museum®. More information is available at www.TheSongbook.org.

Melissa Manchester is an actress and singer-songwriter who performed in Bette Midler’s backing group, the Harlettes, before launching a solo career. Her pop hits have included the Top 10 single “Midnight Blue,” the Grammy-nominated “Don’t Cry Out Loud,” the Grammy-winning “You Should Hear How She Talks About You,” and Academy Award nominees “The Promise” and “Through The Eyes Of Love.” Her songs have been recorded by Barbra Streisand, Roberta Flack, Dusty Springfield, Alison Krauss, Kenny Loggins and many other artists. She also has written tunes for films including The Great Mouse Detective, Lady and the Tramp II, Dirty Girl and Tyler Perry’s For Colored Girls. Manchester starred in the national tours of Andrew Lloyd Webber’s Music of the Night and Song and Dance, and created the role of Maddy, the title character’s mother, on the NBC hit TV series Blossom.

Michael McElroy is a performer, composer and arranger who has appeared on Broadway in shows including Sunday in the Park with George (2017 revival with Jake Gyllenhaal), Next to Normal, Rent (closing Broadway cast), The Wild Party, Big River (Tony nomination 2004, Drama Desk nomination) and Miss Saigon. His national tour credits include Next to Normal, Rent, Big River and Sarafina! McElroy has taught at the University of Michigan, University of Melbourne, Carnegie Mellon University and Tisch School of the Arts at New York University, where he now serves as Director of Diversity, Equity Inclusion and Belonging Initiatives. He is the founder, musical director and arranger for Broadway Inspirational Voices, a multiracial gospel choir of Broadway performers that received the 2019 Tony Award Honor for Excellence in Theater from the American Theatre Wing.

Sylvia McNair is a two-time Grammy Award winner who boasts a stellar three-decade career in opera, oratorio, cabaret and musical theater. Her journey has taken her from the Metropolitan Opera to the Salzburg Festival, from the New York Philharmonic to the Rainbow Room, from the Ravinia Festival to The Plaza, from the pages of The New York Times and The Wall Street Journal to The Times of London and the cover of Cabaret Scenes. Having appeared as a soloist with nearly every major opera company and symphony orchestra in the world, McNair has focused more recently on cabaret performing and the music of Gershwin, Porter, Sondheim and Bernstein.

Nat Zegree has been playing piano since age 3. His father, Steve Zegree, gave him the gift of jazz, funk and classical orchestrations, while his mother, Kellee Love Haselton, introduced him to pop, rock and musical theater. Though classically trained and proficient in sight-reading, his true talent lies in playing without written music. As an actor, Zegree has performed across the country and was nominated for two Broadway World Regional Awards for his role as Jerry Lee Lewis in Ogunquit Playhouse’s Million Dollar Quartet. He recorded and debuted in the world premiere of the Pasek and Paul musical Dear Evan Hansen and has released an album, Fly More Than You Fall.