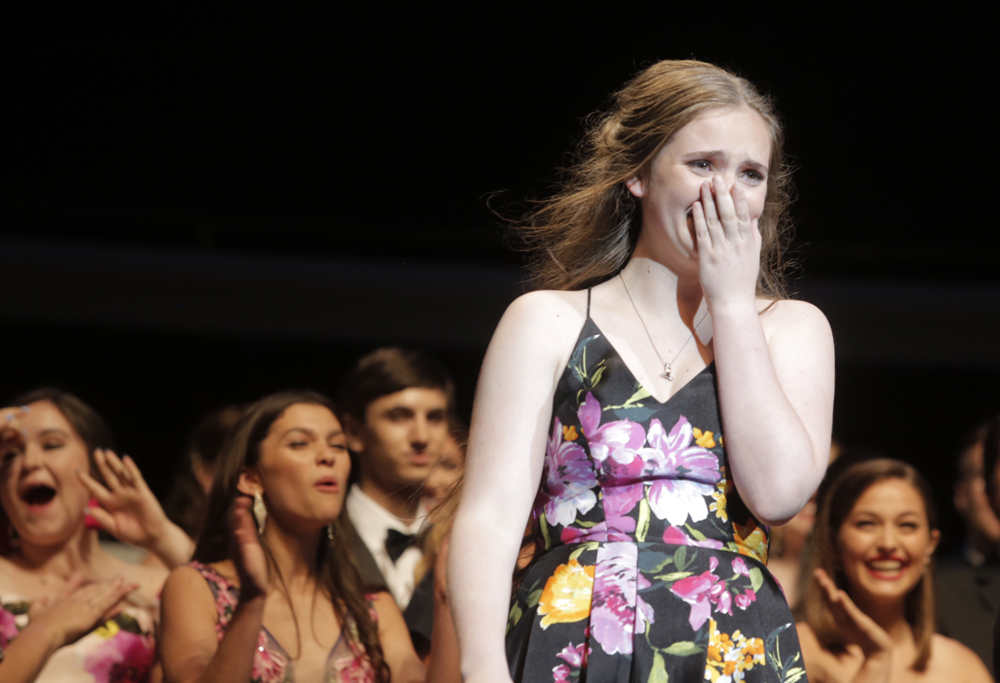 Sadie Fridley of suburban Syracuse, NY, reacts Saturday at the Palladium after being named 2019 Songbook Youth Ambassador. The 16-year-old earned the top award in her second year at the annual Songbook Academy.

CARMEL, IN – A high school junior from upstate New York earned the top title of Songbook Youth Ambassador at the Saturday finals concert to cap the weeklong Songbook Academy®, the nation’s only youth music intensive focused on the timeless popular standards of jazz, Broadway and Hollywood.

Before a near-capacity crowd at the Palladium at the Center for the Performing Arts, 16-year-old Sadie Fridley won over the judges with her renditions of two Great American Songbook classics: “You’ll Never Know” by Harry Warren and Mack Gordon and “Day by Day” by Axel Stordahl, Paul Weston and Sammy Cahn. Both have been recorded many times by Frank Sinatra and other legendary performers.

Now Fridley looks forward to a year of high-profile performances, some alongside five-time Grammy Award nominee Michael Feinstein, founder of the Great American Songbook Foundation and lead mentor at the Songbook Academy, which celebrated its 10th anniversary this year. Past winners have sung the National Anthem at NFL games and played such venues as Carnegie Hall, Lincoln Center and Feinstein’s cabaret clubs in New York and San Francisco.

This was Fridley’s second year at the Academy, a week of workshops and professional mentoring alongside 39 of her peers from coast to coast. Joining Feinstein among this year’s Songbook Academy mentors were Broadway stars Laura Osnes and Michael McElroy, Grammy winners Melissa Manchester and Sylvia McNair, and pianist-composer Nat Zegree.

“I feel really, really honored and incredibly lucky to be part of such an amazing program,” said Fridley, a rising junior at Fayetteville-Manlius High School near Syracuse, NY. “It’s taught me more about music than I could ever imagine.” WATCH INTERVIEW

The other top honorees were Natalie Leclair of Pittsford, NY, who claimed the Songbook Inspiration Award, and Christopher Santiago of Royal Palm Beach, FL, who received the Songbook Celebration Award. Both also will enjoy high-profile performance opportunities.

In addition to the judged performances by the Top 10 finalists, the Songbook Academy Finals concert included group numbers featuring all 40 participants and an appearance by 2018 Songbook Youth Ambassador Lily Rasmussen of Lexington, Ky. Now a theater major at Marymount Manhattan College in New York, Rasmussen sang “I’m Old Fashioned” and “You Are My Lucky Star.”

Leading up to the Songbook Academy Finals were two other public events: Wednesday’s Public Masterclass, in which Feinstein and Osnes provided live onstage coaching to 10 randomly selected vocalists, and Thursday’s Songbook

Showcases, from which the Top 10 finalists were selected for Saturday’s culminating event.

The Songbook Academy is sponsored nationally by the Efroymson Family Fund with additional support from the City of Carmel, Salon 01, Aquage and Old National Bank. The Public Masterclass and Songbook Showcases were sponsored by Ruth’s Chris Steak House. The Finals concert was presented by the Center for the Performing Arts and sponsored by Salon 01 and Aquage, with additional support from Current Publishing LLC. 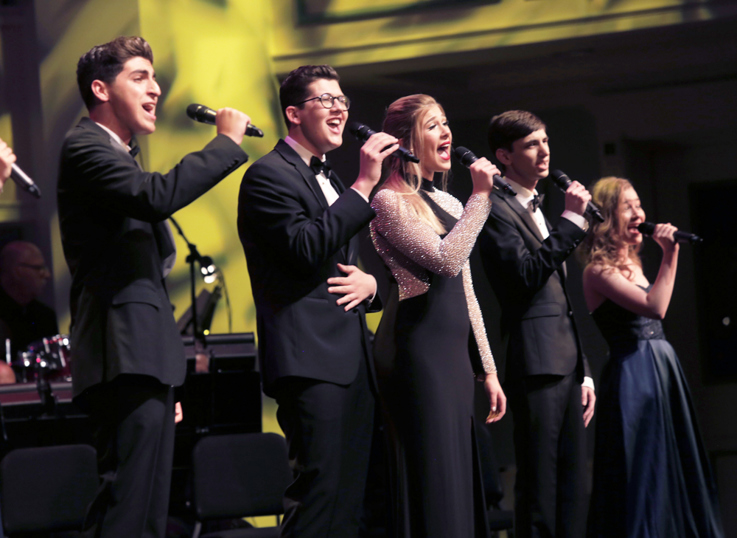