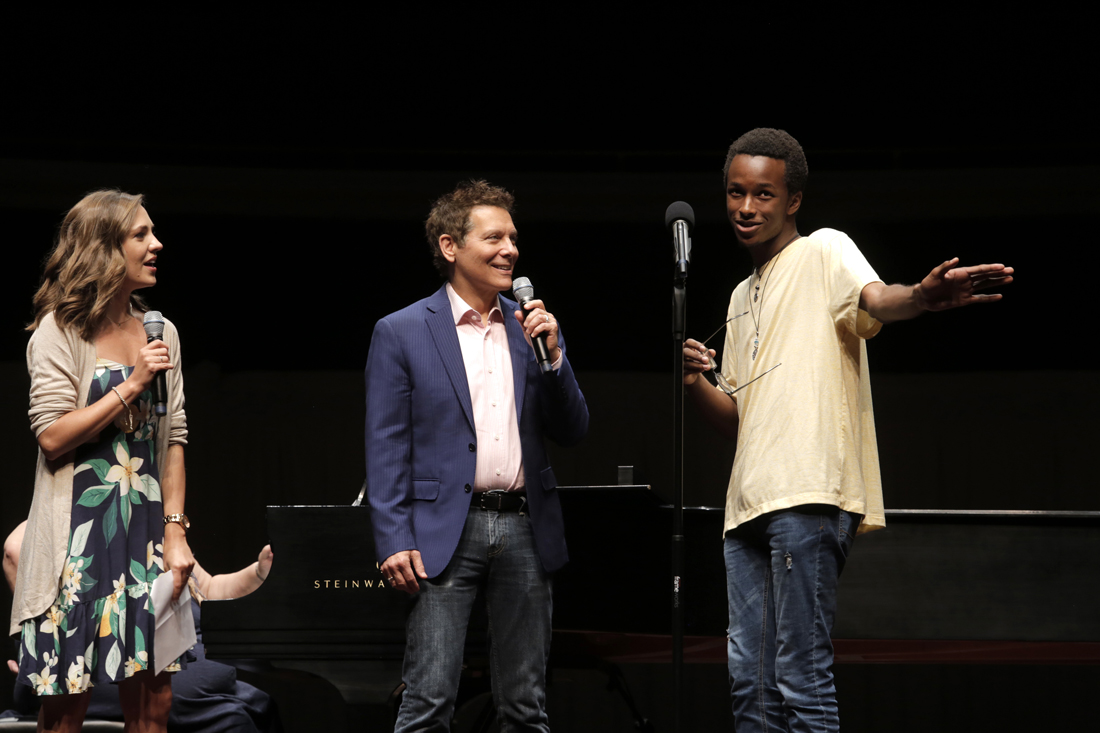 CARMEL, Ind. – U.S. high school singers with interests in musical theater, jazz and classic popular music can apply now to experience a life-changing week of performance opportunities and personal mentoring from Broadway stars and other arts and entertainment professionals.

The Great American Songbook Foundation has opened the application process for its 11th annual Songbook Academy®, the nation’s only youth music intensive focused on the timeless standards of Broadway, Hollywood and Tin Pan Alley. The 2020 Songbook Academy takes place July 11-18 at the Foundation’s home, the Center for the Performing Arts in Carmel, Indiana. Candidates may apply at getacceptd.com/songbookacademy.

Only 40 students nationwide are selected each year to experience a fun but rigorous regimen of workshops, masterclasses and mentoring from arts and entertainment professionals and educators on topics such as vocal technique, vocal health, song interpretation, phrasing, stage presence, music history, business concerns and auditioning for college arts programs. Participants build relationships with peers and pros, perform before live audiences and join the Songbook Academy Alumni Network to stay connected and informed about college programs, auditions and performance opportunities.

“I love this program particularly because it focuses on the Great American Songbook – songs that need to live on,” Osnes says. “There is a musicality and a musicianship and an element of storytelling that can only be told through songs like this. Passing that on to the next generation is what is truly special about this program.”

The week culminates in the Songbook Academy Finals, a performance presented by the Center for the Performing Arts in its acoustically superior 1,600-seat Palladium concert hall. Awards are presented for excellence in several categories, with the top performer earning the coveted title of Songbook Youth Ambassador and a number of national performance opportunities.

Songbook Academy alumni include Maddie Baillio (2014), who starred as Tracy Turnblad in NBC’s Hairspray Live! and appeared in the 2018 Netflix comedy feature Dumplin’; and Melinda Rodriguez (2013), who won the 2019 Ella Fitzgerald Jazz Vocal Competition and recently appeared on Season 17 of NBC’s The Voice.

“A huge reason why I chose this program was the fact that I was the only 15-year-old I knew who listened to and celebrated jazz and the classic music that, in my opinion, shaped the world,” Rodriguez says. “This program really paved the way for the direction that I wanted to head with this music, and allowed me to work closely with artists and like-minded peers who expanded my definition of and passion for this genre. … To anybody thinking about applying, I would say, ‘Just do it!’”

To be considered for the Songbook Academy, high school students living in the United States are invited to submit videos with performances of two contrasting songs. These songs can include hits from the Broadway stage and the golden age of Hollywood or jazz standards written from the 1920s to the 1960s. Submissions are evaluated by a panel of music educators and industry professionals who provide written feedback to every applicant.

Applications received by Feb. 15, 2020, will receive a $30 early-bird discount from the standard $80 application fee. The final 2020 application deadline is March 15. Need-based scholarships and fee waivers and other financial-aid opportunities are available.

The mission of the Great American Songbook Foundation, founded in 2007 by five-time Grammy® Award nominee Michael Feinstein, is to inspire and educate by celebrating the timeless standards of pop, jazz, Broadway and Hollywood. Headquartered at the Center for the Performing Arts in Carmel, Indiana, the Foundation advances this rich musical legacy by curating a vast archive of items representing its creators, performers and publishers; operating a multimedia exhibit gallery; overseeing the Songbook Hall of Fame; offering programs for the public and research opportunities for scholars and artists; and providing educational opportunities for student musicians, including the annual Songbook Academy® summer intensive. The Foundation is a Cultural Affiliate of the Los Angeles-based Grammy Museum®. More information is available at TheSongbook.org.