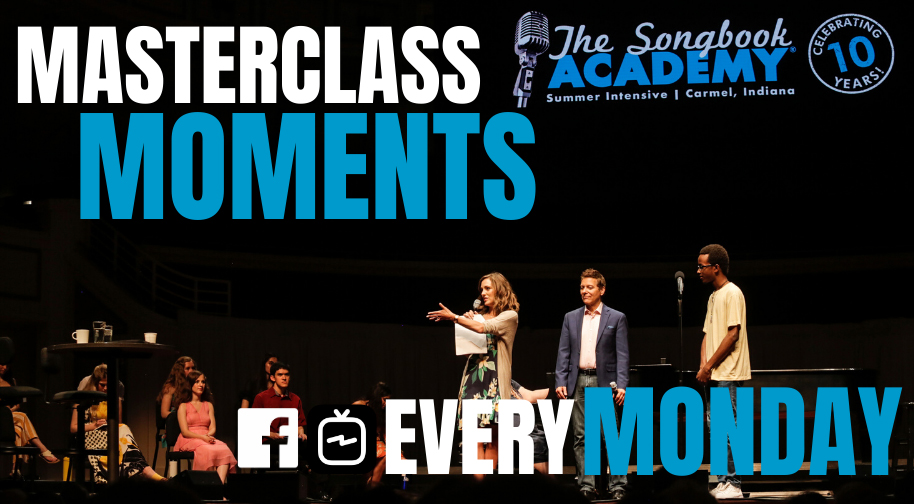 CARMEL, IN – Each year, the nation’s top high school singers experience a week of mentoring from Broadway stars and other arts and entertainment professionals at the Great American Songbook Foundation’s Songbook Academy® summer intensive.

Now, through the new archival video series Masterclass Moments, other young performers – and any fan of timeless popular music – can benefit from the wisdom and wit of such artists as Songbook Foundation founder and five-time Grammy Award nominee Michael Feinstein; actress and singer Laura Osnes, star of Broadway’s Bonnie & Clyde, Cinderella and Bandstand; and TV writer-producer Marc Cherry, creator of Desperate Housewives and Why Women Kill.

Each year, 40 teens from coast to coast are selected through audition videos to attend the Songbook Academy, which takes place at the Foundation’s headquarters, the Center for the Performing Arts in Carmel, Indiana. A highlight of each year’s Songbook Academy is the Public Masterclass, in which Feinstein and other professional mentors analyze the student-finalists’ chosen songs and critique their performances before a live audience in the stately Palladium concert hall. Video clips from past masterclasses and other Songbook Academy workshops form the basis of the new series.

“Education is at the very heart of our mission,” Lewis said. “This series will highlight special moments from the past decade that have never been seen outside of the original on-site event. We hope these virtual masterclasses will continue to inspire young performers who are still exploring and honing their craft amid the current challenges.”

Beginning May 11, Masterclass Moments will premiere a new episode at 7:30 p.m. EDT each Monday on the Songbook Academy Facebook page and Instagram TV. Each 15- to 20-minute segment will include a range of pro tips – typically shared with warmth and humor – on storytelling, body language, comedic timing and other skills central to the performance of jazz and pop standards and classic tunes from Broadway and Hollywood.

The first segment, taken from the 2018 Songbook Academy, features Feinstein and Cherry coaching Top 10 finalist Reed Gnepper through Irving Berlin’s “Let's Face the Music and Dance,” stressing the importance of historical context in interpreting the song. Gnepper, originally from Cincinnati, Ohio, is now a sophomore studying Vocal Arts at The Juilliard School in New York City.

More information on upcoming segments is available at TheSongbook.org/Masterclass-Moments.

Educational workshops and masterclasses at the Songbook Academy are made possible with generous support from the Efroymson Family Fund and Ruth’s Chris Steak House.

About the Great American Songbook Foundation
The mission of the Great American Songbook Foundation, founded in 2007 by five-time Grammy® Award nominee Michael Feinstein, is to inspire and educate by celebrating the timeless standards of pop, jazz, Broadway and Hollywood. Headquartered at the Center for the Performing Arts in Carmel, Indiana, the Foundation advances this rich legacy by curating physical artifacts of its creators, performers and publishers; operating a multimedia exhibit gallery; overseeing the Songbook Hall of Fame; offering programs for the public and research opportunities for scholars and artists; and providing educational opportunities for student musicians, including the annual Songbook Academy® summer intensive. The Foundation is a Cultural Affiliate of the Los Angeles-based Grammy Museum®. More information is available at TheSongbook.org.