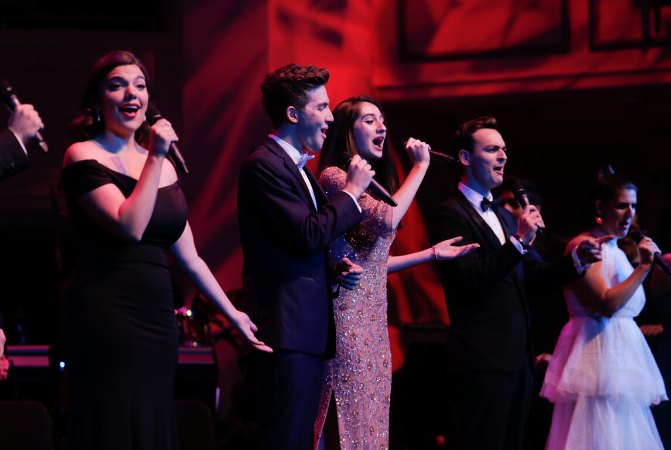 Public events July 20, 21 and 23 will include livestreams, free options

Now in its 13th year, the Songbook Academy is returning to an in-person format after two seasons online. In addition to the many classes, workshops and activities for the students, this year’s schedule includes the return of three public events that have become perennial favorites for local audiences. And for the first time, fans can choose to enjoy the performances in person at the Palladium concert hall or online from the comfort of home.

Tickets are on sale now at TheCenterPresents.org, (317) 843-3800 or the Fifth Third Bank Box Office at the Palladium. The events are:

Each of the 40 national finalists will have a turn in the spotlight to perform a selected song.

The July 23 concert will be an expanded multimedia production featuring all 40 singers in solo and ensemble performances to celebrate their growth over the course of the week, including a tribute to late Broadway icon Stephen Sondheim led by emcee Michael Feinstein. Awards and honors will be presented throughout the evening, and a giant video screen will display interview clips and behind-the-scenes footage from this year’s academy. A performance by 2013 Songbook Academy alumna Melinda Rodriguez – winner of the annual Ella Fitzgerald Jazz Vocal Competition and competitor on Season 17 of NBC‘s The Voice – will welcome the new class to the Songbook Alumni Network.

The 2022 Songbook Academy finalists from Indiana are:

The Songbook Academy is sponsored nationally by the Efroymson Family Fund and also supported by the City of Carmel and Salon 01. The Songbook Academy in Concert performance is part of the Center for the Performing Arts’ Hoosier Village & The Barrington of Carmel Songbook Series and the 2022-2023 Center Presents Season in partnership with Allied Solutions. The Ella Fitzgerald Charitable Foundation Mentor Champions support the involvement of the national faculty teams who guide and support the students throughout the week.

About the Great American Songbook Foundation
The mission of the Great American Songbook Foundation, founded in 2007 by five-time Grammy® Award nominee Michael Feinstein, is to inspire and educate by celebrating the timeless standards of pop, jazz, Broadway and Hollywood. Headquartered at the Center for the Performing Arts in Carmel, Indiana, the Foundation advances this rich legacy by curating physical artifacts of its creators, performers and publishers in the Songbook Library & Archives; operating a multimedia exhibit gallery; overseeing the Songbook Hall of Fame; offering programs for the public and research opportunities for scholars and artists; and providing educational opportunities for student musicians, including the annual Songbook Academy® summer intensive. The Foundation is a Cultural Affiliate of the Los Angeles-based Grammy Museum®. More information is available at TheSongbook.org.