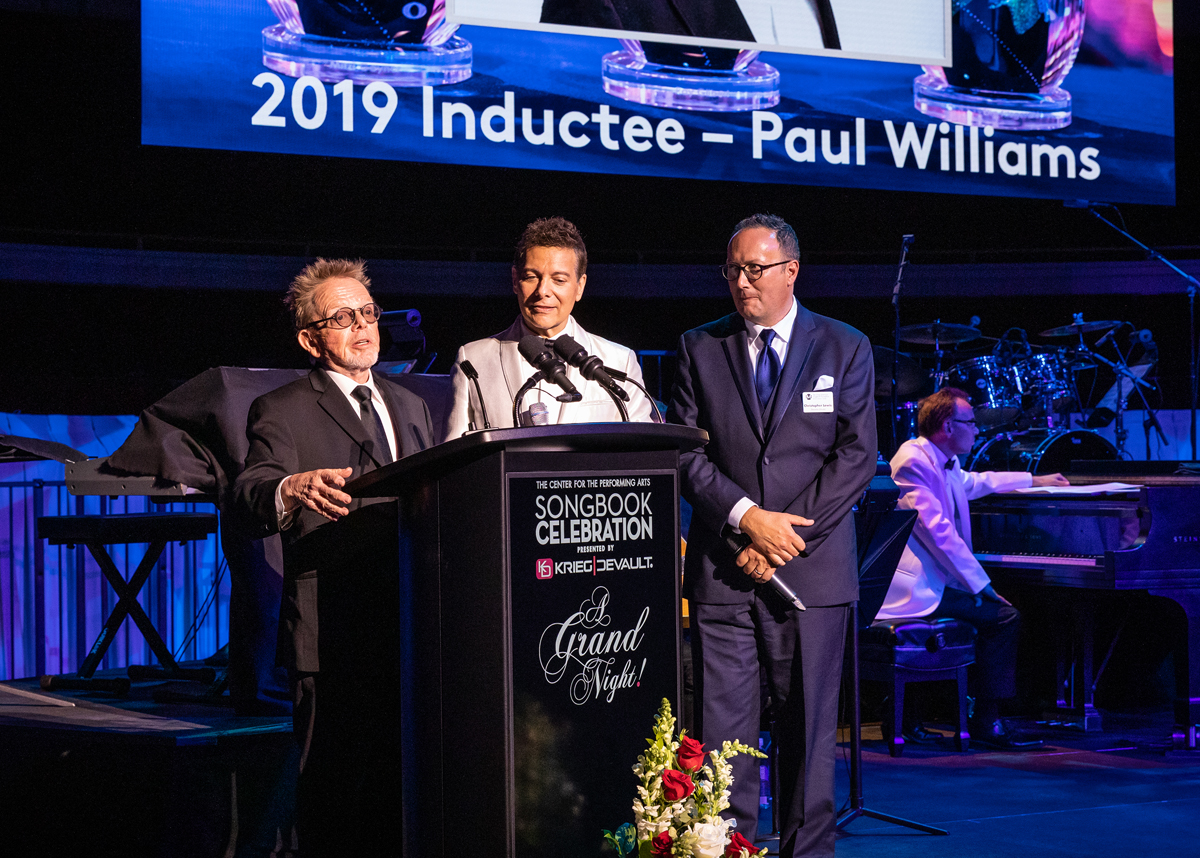 Songwriter Paul Williams (left) is joined by Songbook Foundation Founder Michael Feinstein and Executive Director Christopher Lewis as he is inducted into the Songbook Hall of Fame. (Photos by Sara C Imagery)

CARMEL, IN – The Great American Songbook Foundation inducted songwriter Paul Williams and composer-bandleader Duke Ellington into its Songbook Hall of Fame during a star-studded gala Saturday at the Center for the Performing Arts in Carmel.

Foundation Founder Michael Feinstein emceed the induction ceremony and 2016 Hall of Fame inductee Dionne Warwick delivered the headline performance at the 2019 Songbook Celebration presented by Krieg DeVault. The annual gala generates support for the artistic and educational programming at the Center, a three-venue performing arts campus where the Songbook Foundation is headquartered.

Williams, whose credits include “Evergreen,” “We’ve Only Just Begun,” “Rainbow Connection” and many other hits, surprised the capacity crowd in the Palladium concert hall with an unexpected contribution to the night’s philanthropy, offering to write a personalized song for the highest bidder. He awarded the prize to two attendees who bid $35,000 each, generating a quick $70,000 for the Foundation’s historical preservation initiatives.

Currently serving as president of the ASCAP performance-rights organization, Williams also delivered a touching tribute to his songwriter brother Mentor Williams, who died in 2016. Paul Williams led the black-tie attendees in an a cappella rendition of Mentor’s song “Drift Away,” a massive 1973 hit for Dobie Gray that has been covered by many artists since.

“Mentor Williams,” he said, looking skyward, “you just got inducted into the Great American Songbook Hall of Fame.”

Dancer-choreographer Mercedes Ellington, herself a Broadway notable, accepted the Hall of Fame award on behalf of her late grandfather Edward Kennedy “Duke” Ellington. She recalled accompanying him and his orchestra on a historic 1971 State Department tour of the Soviet Union, stoking international trade by arriving with a stash of Pepsi and returning with a cache of Stolichnaya vodka.

The tribute to Ellington included a performance of his classic “It Don't Mean a Thing (If It Ain’t Got That Swing)” by 16-year-old Sadie Fridley of Syracuse, NY, who earned the top honor of 2019 Songbook Youth Ambassador in July at the Foundation’s annual Songbook Academy® summer intensive. The weeklong academy is the nation’s only youth music program focused on the timeless Tin Pan Alley tunes, jazz standards and Broadway and Hollywood favorites that comprise the Great American Songbook.

Saturday’s program also included tributes to recent Hall of Fame inductees Tony Bennett and Doris Day. The Songbook Foundation presented the award to Bennett when he performed at the Palladium in May. Feinstein visited Day at her California home in April for her 97th birthday celebration, shortly before her death in May.

The Great American Songbook Hall of Fame celebrates lyricists, composers and performers who helped to create the soundtrack of our lives with their contributions to American popular song. Hall of Fame inductees are selected based on factors including musical influence on other artists, length and depth of career and body of work, innovation and superiority in style and technique, and overall musical excellence. Previous inductees have included Cole Porter, Irving Berlin, George and Ira Gershwin, Ella Fitzgerald, Frank Sinatra and Liza Minnelli.

The mission of the Great American Songbook Foundation, founded in 2007 by five-time Grammy® Award nominee Michael Feinstein, is to inspire and educate by celebrating the timeless standards of pop, jazz, Broadway and Hollywood. Headquartered at the Center for the Performing Arts in Carmel, Indiana, the Foundation advances this rich musical legacy by curating a vast archive of items representing its creators, performers and publishers; operating a multimedia exhibit gallery; overseeing the Songbook Hall of Fame; offering programs for the public and research opportunities for scholars and artists; and providing educational opportunities for student musicians, including the annual Songbook Academy® summer intensive. The Foundation is a Cultural Affiliate of the Los Angeles-based Grammy Museum®. More information is available at TheSongbook.org.