A new LED video system will enhance the audience experience and open the door to new avenues of programming and revenue for the Center for the Performing Arts and its Resident Companies.

The fully portable state-of-the-art system involves 95 thin modular panels, each 19 inches square, which can be snapped together in endless configurations large and small at the three venues operated by the nonprofit Center: the 1,600-seat Palladium concert hall, the 500-seat Tarkington theater and the black-box Studio Theater.

For example, the entire set can be stacked like bricks into a 12-by-21-foot HD video wall for a Palladium concert, but smaller combinations can be used, a few at a time, to create multiple displays around the campus. For the City of Carmel’s Martin Luther King Jr. Day celebration Monday, 45 panels were assembled into a smaller display for the Tarkington. 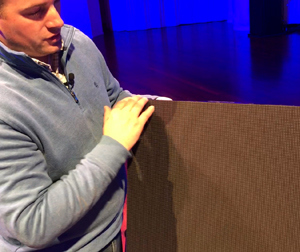 Among other uses, the system expands possibilities for the Center’s concert business, in which touring artists increasingly require certain video capabilities for their performances, Vice President of Operations Jeff Steeg said.

“Up to now, the expense of renting video equipment has sometimes forced us to pass up nice opportunities,” Steeg said. “Having this system in house takes that cost out of the equation as we weigh the financials involved in presenting a particular event.”

Beyond concerts, the system opens up a range of potential programming, including film screenings, sporting events, livestreams and gaming competitions. Corporate retreats, social gatherings and other non-arts rental events – a growing business line for the Center – now have access to better video options at lower cost.

Manufactured by ROE Visual, the “Black Onyx” model LED panels were supplied by Dodd Technologies, a Pendleton-based event production company that maintains additional panels for rent when even larger video displays are needed. The cost of the system, including a Barco brand video processor and rigging designed by Tyler Truss Systems of Pendleton, totaled in the low six figures, but President/CEO Jeffrey C. McDermott said that outlay will be recouped easily.

“We constantly look for new types of programming to present and new revenue streams to support our arts and education mission,” McDermott said, noting the purchase was made from the operating surplus generated by recent successful seasons. “This video system is an investment we’ve made to create innovative business opportunities for the Center and provide greater value to the community.”